London: It has long been dismissed as an old wives’ tale that morning sickness signals a healthy pregnancy. But experts now say it is probably true giving encouragement to sufferers, who famously include the Duchess of Cambridge. More than four in five women battle nausea in the first 12 weeks of pregnancy, and around half experience vomiting.

Scientists at the University of Reading say the sickness may be a good thing as it is caused by a hormone vital for a healthy pregnancy. Endokinin, which acts on the brain to cause morning sickness, also ensures good blood flow through the placenta so that oxygen and nutrients can reach the unborn baby. 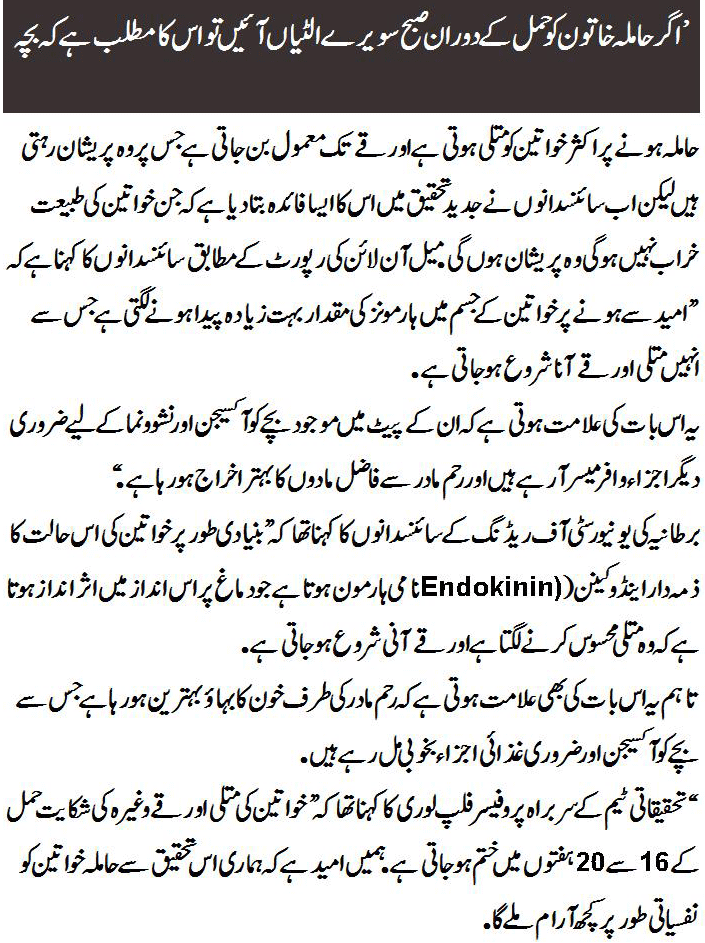 Professor Philip Lowry, from the University of Reading’s school of biological sciences, said he hoped the news would bring ‘psychological relief’ to pregnant women.

‘There may be a temptation to use endokinin-blocking drugs to treat morning sickness during pregnancy, but these findings suggest that such drugs could affect the health of the pregnancy and must be avoided,’ he said.

Awful as morning sickness can be, it does not endanger babies and usually clears up by weeks 16 to 20 of a woman’s pregnancy. However, some women, such as the Duchess of Cambridge, suffer a more severe form of nausea and vomiting, hyperemesis gravidarum, which can see them admitted to hospital and given fluids through a drip.

However, some women, such as the Duchess of Cambridge, suffer a more severe form of nausea and vomiting, hyperemesis gravidarum, which can see them admitted to hospital and given fluids through a drip. Kate developed acute morning sickness weeks into her current pregnancy, having been hospitalized when she was expecting Prince George and suffering again with Princess Charlotte.

The expert review, led by Professor Lowry, states: ‘Although morning sickness is very unpleasant, the “old wives’ tale” that it results in a healthy baby now has a credible scientific explanation.’ The body releases endokinin, which improves blood flow in the placenta, to ensure the baby is not starved of nutrients.

However, its entry into the bloodstream stimulates receptors in the brain known to cause nausea and vomiting. The review, published in the Journal of Molecular Endocrinology, references a study of 800 pregnant women from last year. It found that, for those with a history of miscarriage, vomiting and nausea in subsequent pregnancies were linked to higher odds of a successful birth.